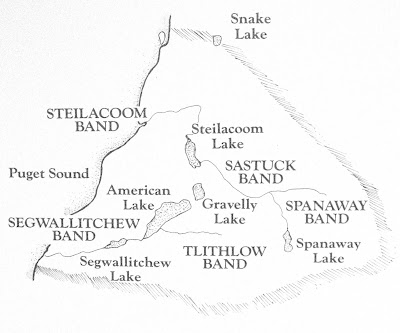 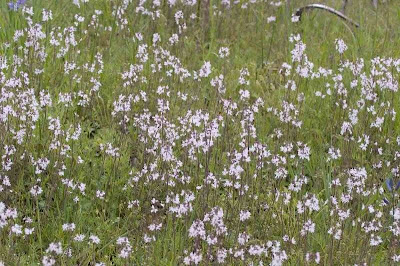 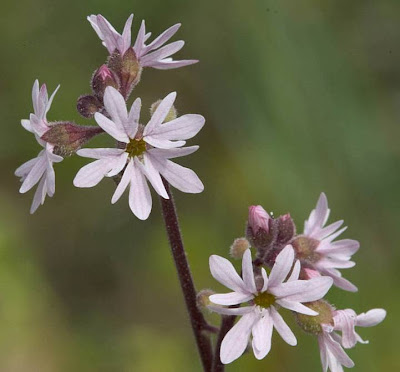 A prominent feature on the hills and plains of Steilacoom (in the area of our main village) was a pink flower known as Indian Pink (Lythophragma parviflorum) pictured above. Therefore, among the Puget Sound tribes, the name Steilacoom was taken to mean the people of the Indian Pink area. 'Steilacoom' is actually an anglicization of the Whulshootseed (sometimes spelled 'Lushootseed') word č'tilqwəbš (pronounced "CH'tilQWubSH"). Today the Steilacoom Flower is also known as smallflower fringecup or small-flowered woodland star.

The Steilacoom were perhaps the most affected of all western Washington Tribes by early white settlement. Located within our territory were the first trading post, the first United States Army fort, the first church, the first jail and the first incorporated town north of the Columbia River.

Following two decades of increased settlement by whites in their homeland, the Steilacoom Tribe were a party to the Medicine Creek Treaty in 1854. Advised by the Indian Office in Washington, DC not to place reservations in areas with expected concentrations of white citizens, the treaty negotiators for the United States did not place a reservation near the blossoming town of Steilacoom. Therefore the treaty did not provide them with a separate reservation but directed them onto reservations established for their neighbors, the Puyallup, Nisqually and Squaxin.

In 1856 the Steilacoom and other Tribes signing the Medicine Creek Treaty met with Governor Stevens to voice their grievances concerning the treaty. The chief of the Steilacoom Tribe summed up the feelings of many tribal members in discussing the lack of a separate reservation:

Sam Young, Chief of the Steilacoom Tribe,
at the Fox Island Council, August 4, 1856.


Following the signing of the treaty, some Steilacoom Tribal members did move onto a number of reservations throughout the region including the Puyallup, Nisqually, Skokomish and Tulalip. However, many Steilacoom Indians, including Sam Young, refused to move away from their aboriginal homeland. These were the ancestors of the modern-day Steilacoom Tribe.

We have survived by means of a mixture of traditional activities and our ability to use traditional skills outside of our own culture. Although we did not receive a reservation, we continue to thrive today by maintaining our social and political organization.

Even though the Steilacoom Tribe signed a ratified treaty with the United States and has maintained an unbroken line of political leadership, the Tribe today is not recognized by the federal government. However, we were dealt with as a Tribe by the Bureau of Indian Affairs on an on-again, off-again basis from the 1910s through the 1960s. Local, County, State and other Federal agencies do recognize the Tribe today.

Members of the Tribe are united by a common bond: the quest to hold onto our Steilacoom Indian heritage, to preserve and protect our identity as a distinct and viable Indian Tribe, and to regain rights and privileges guaranteed by the Medicine Creek Treaty. Unlike most other treaty signing Tribes, we have had to maintain our identity without the benefit of a land base and Federal resources.

There have been hard times but the continuation of a distinct Steilacoom Tribal identity has never been in doubt. It is something that will always survive. A simple paragraph written by an Oregon resident in support of Federal Recognition provides a positive note for all people to live by. He said: "No person, agency, or government has the right to deprive a people of their heritage, and all people have a natural right to their customs, culture and ancestry."

The Steilacoom Tribal Cultural Center, containing the Tribal office, Museum, Gift Shop and archives, is located at 1515 Lafayette Street in the historic town of Steilacoom. At the door as you enter, in proud commemoration of our ancestors, are inscribed these words:

The Steilacoom Tribal Cultural Center is hereby dedicated in memory of the Tribal ancestors who walked here before us to be shared for all time with those that follow.