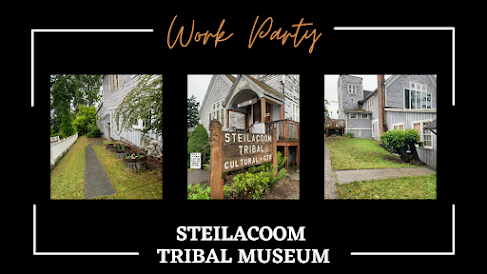 We want to give a huge shout out to our volunteers who have been working so hard to keep the Steilacoom Tribal Museum beautiful! 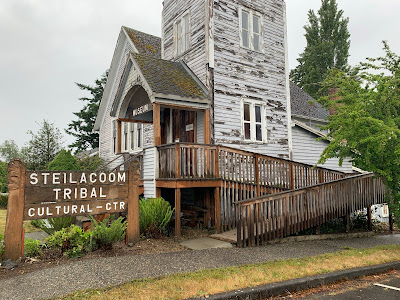 We held two work parties this year, one in June and one in October. Both of these events were overseen and coordinated by our Tribal Council volunteer, Rebecca. We had so many Steilacoom Citizens show up, ready to work! We even had many volunteers from the Town of Steilacoom come down to help us. With so many people working together, we were able to accomplish so much! 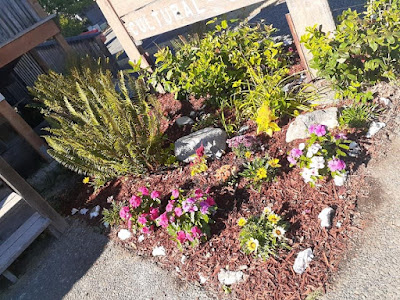 In June we had a major concentration on the inside of our building too. Our volunteers helped us to get both the inside and outside cleaned up and ready for us to open our doors to visitors again! The shut-downs over the previous year have made it difficult for us to keep our Museum open. It was very refreshing to get the building (inside and out) all cleaned up before opening our doors again this year. 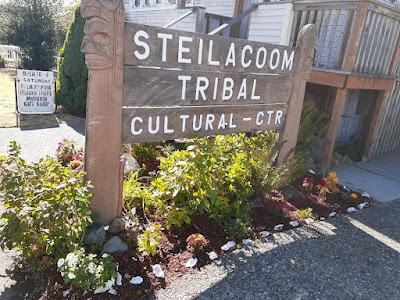 Thank you so much Rebecca for organizing these work parties! I also want to mention that Becca and her family have really gone above and beyond at keeping our building beautiful! In August they put out new beauty bark and cleaned up our gardens. Such beautiful work! Thank you so much to everyone for taking such thoughtful care of our Home! 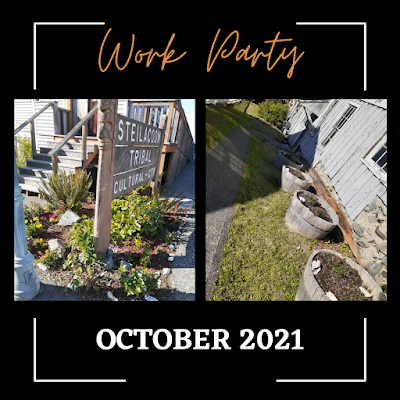 Video from our Work Party June 2021

Please check Google and Facebook for up-to-date hours of operation.

Email ThisBlogThis!Share to TwitterShare to FacebookShare to Pinterest
Labels: 2021, Liq'ted Garden, Past Events 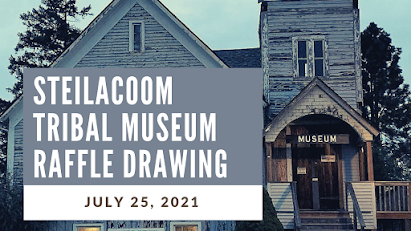 After taking a break in 2020 due to closures and the Stay at Home Order - Our Annual Raffle Drawing is back!! 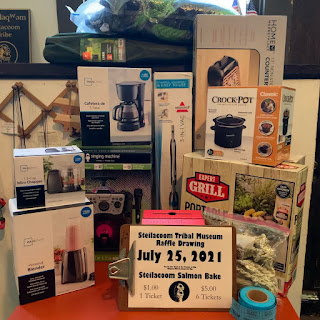 Details: First of all, if you purchased Raffle Tickets in 2020, your tickets have been automatically entered into the 2021 Raffle Drawing.

You can purchase tickets for this year's Raffle Drawing by coming to the Steilacoom Tribal Museum during our regular business hours (see below) or by attending The Town of Steilacoom's Annual Salmon Bake at Sunnyside Beach. You do not need to be present to win. Just write your name and phone number on the back of each ticket and we will contact the winners who are not at the event.

Send us a message through our Facebook or Instagram page if you have any questions, or call us during our normal business hours. The winners of the drawing will be announced on our Social Media after the event.

Items in this year's Raffle Drawing:

The Steilacoom Tribal Cultural Center and Museum is currently Open by Appointment only. You can send us a Message via Google, Facebook, or Instagram for more information and to schedule an appointment. Our volunteers will do their best to accommodate a time that works best for you and your group.

We can schedule private Group Tours and visits to our Tribal Gift Shop.

We look forward to visiting with you soon! 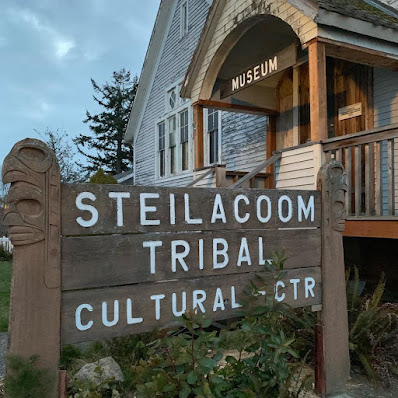 Have you been into the Steilacoom Tribal Gift Shop recently? We have so many different Native Made items for sale! Everything sold in our Tribal Gift Shop is Native American Made, by Indigenous Peoples from either North, Central, or South America. 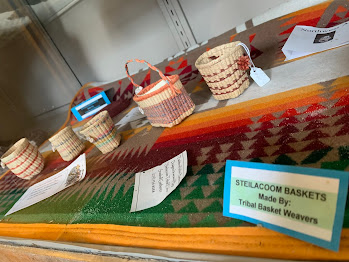 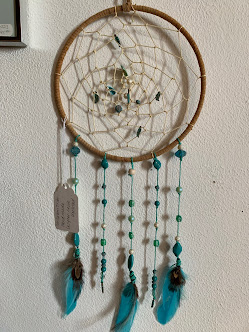 We also have Steilacoom Tribal Logo items for sale in our Gift Shop. You can purchase a coat, shirt, hat, sweatshirt or a Tumbler with the Steilacoom Tribe Logo, to show support of the Steilacoom Tribe. We even have kids' sizes available! Let us know us know what sizes you're looking for so that we can make sure we have them in stock. 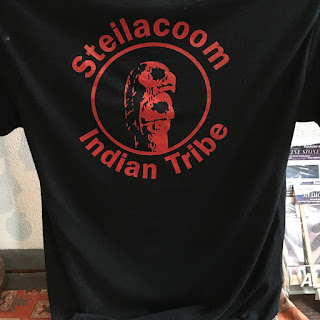 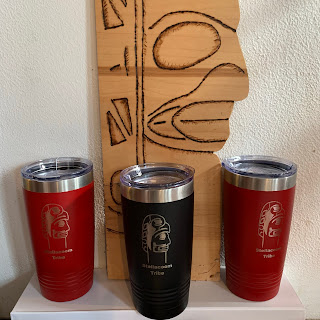 We have so many more fun, unique gift items for sale in our Gift Shop! 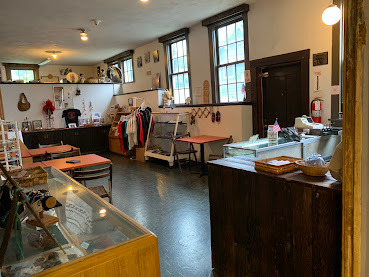 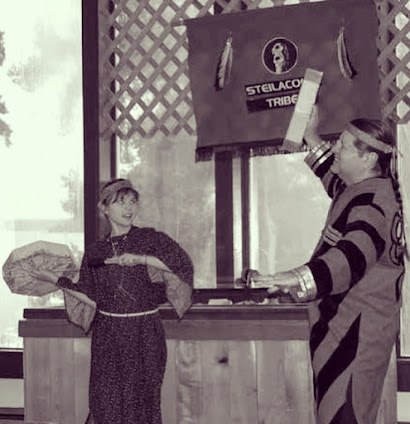 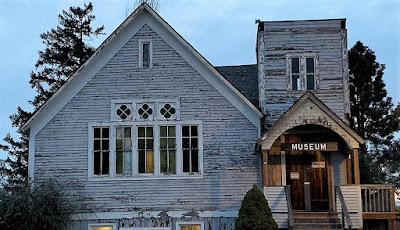 Here is little history about the Historical Building that is currently owned and operated by the Steilacoom Tribe:

This historical building was originally owned by the Oberlin Congregational Church. According to historical records, the building was built using materials from the old church, which was torn down; as well as timbers from the Methodist Episcopal Church, which was built in 1854. This building, which today is the site of the Steilacoom Tribal Cultural Center and Museum, was completed and became the new home of the Oberlin Congregational Church in 1903. This building was their home until they chose to build in a new location, across the street, in 1961. At that time the original church building was sold and used as a home for over 20 years.

In 1987 the building was purchased by the Steilacoom Tribe. A dedication and Grand Opening was held on May 13, 1989. Our first exhibit was on the Pre-History of Washington State to celebrate the State’s Centennial.


“In the memory of the Tribal Ancestors who walked here before us, to be shared for all time with those that follow."~ May 13,1989 Dedication


A question that we hear often is, “Are you going to re-paint the building?”


That’s a valid curiosity. The short answer is yes! The long answer is.....longer.

For those of you who do not know, the Steilacoom Tribe was not given a reservation (despite signing the Medicine Creek Treaty in 1854) and so does not receive federal funds. Everything is volunteer run, by the non-profit organization, Steilacoom Tribal Museum Association. All of our funding for projects (and to pay monthly bills that allows us to keep our Museum doors open on a regular basis) are received through fundraising and donations. When you visit the Museum on a Saturday you will find volunteers from the Steilacoom Tribe and their friends/family.

In 2012 we started renovations that were completed in 2014, to fix our front porch (which was separating from the building) and to add a wheelchair ramp with access to our upstairs. That was an awesome project that we were very excited about! Having wheelchair access to the upstairs gallery of our Museum was something that we had been dreaming about for years. It was wonderful to see that project completed!

We are currently working on funds to get renovations moving forward on the “paint” which is a lot more complicated than just paint. We had to have many inspections done, and since we are a Historical Building site, we have to make sure that we have permission and permits for any changes or work that gets done on our building. We have to have the siding inspected, to ensure that painting the current siding will work; and we may possibly have to have some (or all) of the siding replaced. It’s been quite a long process! In the past we have painted the building, only to have the paint shortly after begin to peal away just as before. That was a major clue for us that a lot more work needs to be done before we can cover the building with a fresh coat of paint.

But there is light at the end of this tunnel!! Keep a look-out because we will have updates coming soon on our current project to fix our building’s exterior. Check out our Facebook page for more information and regular updates. 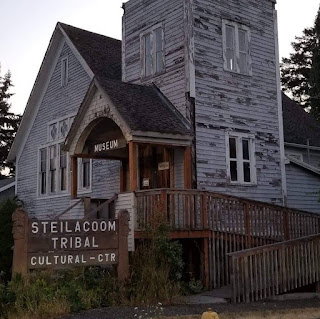 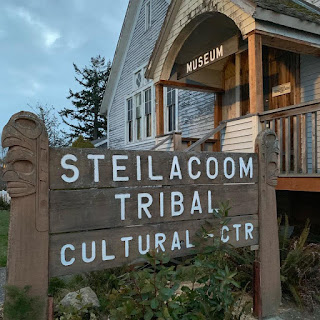 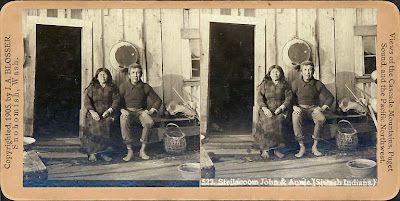 Notes from the UW site...


Steilacoom John was a leader of the Steilacoom Tribe who lived in the area around Chambers Creek and the territory surrounding Fort Steilacoom, Washington. This region, southwest of what is now Tacoma, was one of the earliest in the Puget Sound region to be occupied by white settlers. John was a son of Ce-col-quin, a signer of the 1854 Medicine Creek Treaty, and he led an extended family that camped at McNeil Island each summer. In this photograph, John and his wife Annie are seated in front of their home with a basket and other household items. The stereographic image was part of a series made by J.A. Blosser illustrating Pacific Northwest scenes. 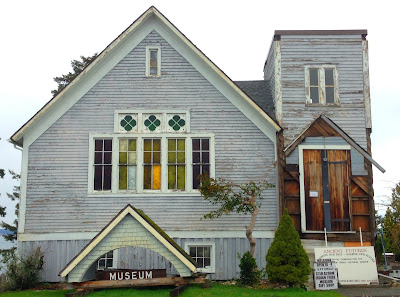 August 2012. The renovations have started!

There are many projects in store to repair and renovate the Steilacoom Tribal Cultural Center & Museum. First on the list: construct a ramp to the front door for disabled access to the 2nd floor. This is required for the Center & Museum to officially keep it's doors open to the public. Once the ramp is complete, the portico will be re-added to the exterior of the building.

Future projects include a secondary exit from the 2nd floor for public safety (also required for the Center & Museum to keep it's doors officially open), renovations to the kitchen and cafe on the first floor, and repair and improvements to the exterior of the building. 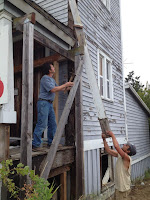 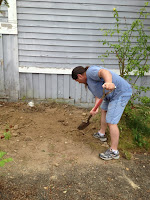 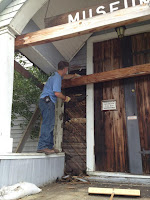 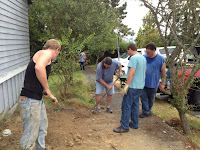 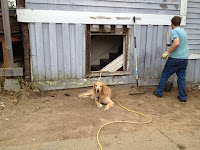 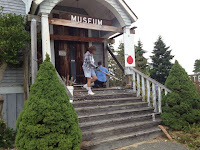 In The News: 'Stick Soup' 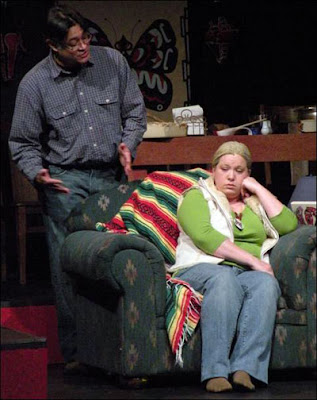 5/22/2011 - Lynn Geyer of The Suburban Times recently reported on the play, Stick Soup, by Danny Marshall and Lacie Deck in her article 'Stick Soup' brings Steilacoom legends to life.
No comments: