The Steilacoom Tribe: A Brief History 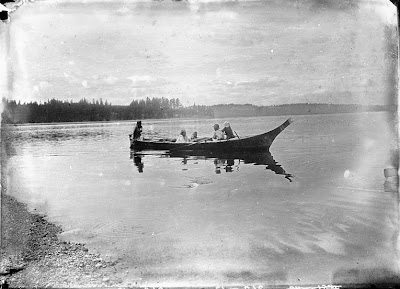 Advised by the Indian Office in Washington, DC, not to place reservations in a areas with large concentrations of white citizens, under protest from the Tribes involved, the treaty negotiators for the United States did not place a reservation near the blossoming town of Steilacoom. Many Steilacoom Indians refused to move away from their homeland. They survived by means of a mixture of traditional activities and their ability to use their traditional skills outside their culture.

Although it did not receive a permanent reservation, the Tribe has maintained social and political continuity up to the present day. At the time of the last census, the Tribe had a membership of 617. Approximately 94% of the Tribe descends from members who were living at the time of the treaty signing (6% are members adopted from other Tribes). A substantial number of Tribe members live in or near the traditional homeland with about 47% in 139 households residing within Pierce County. The traditional area of the Steilacoom encompasses territory as far north as Day Island, west of Tacoma, south to the Nisqually River and inland to the mountains. Major villages were located in today’s communities of Steilacoom, Lakewood, Spanaway, and Roy.

In 1988, the Tribe opened a new Cultural Center and Museum at 1515 Lafayette Street, within the historic district of the Town bearing their name, Steilacoom. The Steilacoom Tribal Cultural Center is located in the aboriginal homeland of the Tribe overlooking the water of Puget Sound. The Center houses changing museum exhibits, research facilities, a gift and coffee shop, and the Tribal headquarters. The Center has received visitors from around the world, including scheduled tours for schools and special groups.

On May 13, 1989, the Steilacoom Tribal Cultural Center was dedicated: “In the memory of the Tribal Ancestors who walked here before us, to be shared for all time with those that follow.

Danny Marshall is the current Chairperson of the Steilacoom Tribe